Posted on November 4, 2021 by dismuke
If you enjoy these recordings help us spread the word that this wonderful, forgotten music exists by sharing this page with your friends. 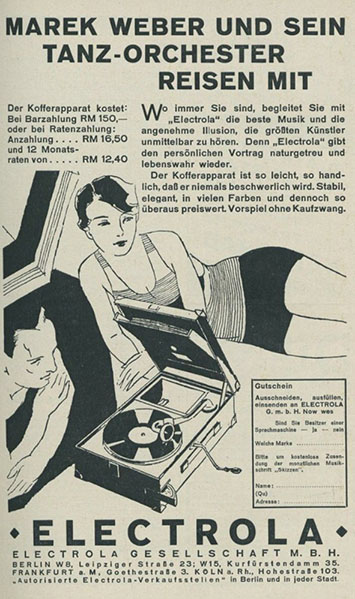 Eleven 78 rpm audio restorations are being added to Radio Dimuke’s music library this week and will begin airing on Thursday. Below are a few highlights.

Our first two selections feature performances by the Marek Weber orchestra of songs from Paul Abraham’s jazz operetta Blume von Hawaii (Flower of Hawaii).  The production was highly successful and a film version was made starring Marta Eggerth.  After the Nazis came to power, however, it was subsequently banned as “degenerate art” partially on grounds that Abraham was Jewish and because its storyline involved a German sailor falling in love with a Hawaiian lady.  “Potpourri From Blume von Hawaii” features a medley of songs from the production with vocal passages provided by The Comedian Harmonists, a harmony group that was at the height of its international fame. Paul Abraham, Marek Weber, Leo Monosson, who provides the vocal on “My Little Boy,” and several members of the Comedian Harmonists ultimately fled Germany to escape Nazi persecution.

The most famous versions of “Smoke Rings” were recorded by the Casa Loma Orchestra which recorded it for Brunswick in 1932 and again, in 1937, after the band began recording for Decca.  This version here that the Leo Reisman Orchestra cut for Victor is quite different and features a vocal by the famous composer Harold Arlen.  This song, however, was not one of Arlen’s compositions.

“I Was True” features a vocal by Al Bowlly, one of Great Britain’s top 1930s crooners along with The Three Ginx, a vocal trio that was also popular at the time.  Bowlly’s career was cut short when he was killed during a 1941 air raid on London.  Some of bandleader Ray Noble’s British recordings were issued in the United States on Victor and were so successful that Noble moved to that country in 1934.  His American band became the house band of several network radio programs.  Ray Noble was one of several bandleaders credited on records as the leader of the New Mayfair Orchestra. The group, in fact, was just a recording pseudonym used by the HMV label between 1928 and 1942.

“Ya no soy más aquél” was recorded in Buenos Aries by Julio Pollero’s tango band.  The song’s composer was Alberto Carbone.

Joe Green was one of three xylophone-playing brothers who came to fame through their Green Brothers Novelty Band.  His brother, George Hamilton Green, was regarded as one of the 20th century’s top xylophonists.