A Vintage Fourth of July Concert

Posted on July 3, 2021 by dismuke
If you enjoy these recordings help us spread the word that this wonderful, forgotten music exists by sharing this page with your friends. 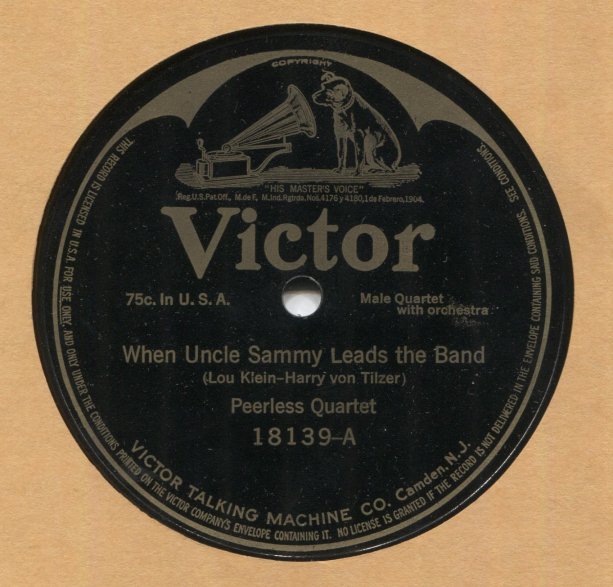 Independence Day in the United States is one of the rare occasions when it is still common for people of all ages to gather and enjoy – often at live performances – festive music from the late 19th and very early 20th centuries.

The virtual “concert” presented here is anything but live. All of the recordings are over 100 years old and were made prior to the advent of the microphone. But the instruments used by concert style military bands reproduced well enough through the old acoustic recording horns to yield performances that are still enjoyable over a century later.

Below you will find an option to hear all of the recordings play though continuously in “concert style” followed by a section with background information where you can listen to each recording individually.

Listen “Concert Style” – Click on the arrow in the audio player to hear all recordings play through continuously.

About The Recordings – Listen Individually

Patriotic themes were a popular subject for Tin Pan Alley song writers throughout the 1910s decade. When this Harry Von Tilzer/Lou Klein composition was recorded in July 1916, World War I was raging in Europe. The United States would not enter the conflict until April of the following year. The Peerless Quartet was a vocal group that made hundreds of recordings between 1901 and the late 1920s.   During this recording session, the quartet consisted of Henry Burr, John H Meyer, Albert Campbell and Arthur Collins.

This march was composed by “March King” John Philip Sousa in 1920 as the official march of the 1921 graduating class of the US Naval Academy. Sousa’s band toured extensively between the 1890s and his death in 1932 and made over 1,700 recordings. But Sousa was not a fan of “canned music” and was personally present for only a handful of his band’s recording sessions.

This patriotic themed composition was written by Tin Pan Alley songwriter Ted S Barron who was responsible for both its music and lyrics. Henry Burr was a Canadian tenor who was perhaps the most prolific vocal recording artist during the first quarter of the 20th century. In addition to his many solo and duet recordings, he also recorded as part of the Peerless Quartet, the Sterling Trio and the American Quartet.

This march, composed by Alfred F Weldon, dates back to 1901. Weldon was the bandmaster for the Second Regiment Band of Chicago which eventually was known as Weldon’s Band. Conway’s Band, led by Patrick Conway, was formed in 1895 in Ithaca, New York and was originally known as the Ithaca Band. While the band had made records since 1912, the May 1919 performance presented here was the band’s first appearance on the Edison label. The recording here was taken from an Edison Diamond Disc but Edison also released it as a Blue Amberol cylinder.

This John Philip Sousa march was published in 1920 and was dedicated to the American Legion.

This march was published in 1917 and composed by Danny Nirella who, for many decades, led marching and concert bands in the Pittsburgh area. Arthur Prior was John Philip Sousa’s star trombone player and assistant bandleader. He left Sousa’s band to form his own in 1903 which became famous in its own right. Because John Philip Sousa disliked recorded music and refused to attend recording sessions, most of the Sousa’s pre-1904 recordings were, in fact, conducted by Arthur Pryor. Because of Pryor’s association with Victor, he continued to step in as conductor for Sousa’s recording sessions for a number of years after he left the band.