Benny Kruger And His Orchestra – 1924

Posted on May 16, 2021 by dismuke
If you enjoy these recordings help us spread the word that this wonderful, forgotten music exists by sharing this page with your friends. 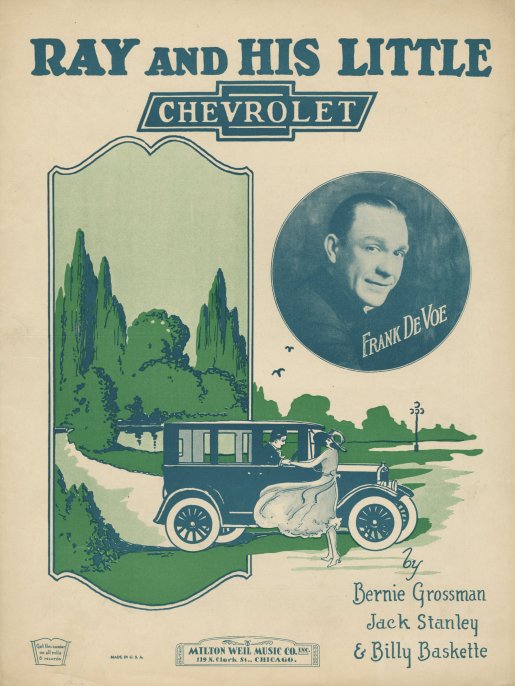 As automobiles became more affordable and an increasingly important part of modern American life during the 1910s and 1920s, the songwriters for the big Tin Pan Alley music publishers churned out countless songs about the machines and their owners.  Two common themes centered around their lack of reliability and young men hoping that having a car might result in success in gaining the affection of young ladies.  Sometimes, the songs were about both, as in the case of the 1910s hit “He’d Have to Get Under — Get Out and Get Under (to Fix Up His Automobile)”

Songs that referred to specific brands of automobiles were most often about Fords.  As the 1920s progressed, Ford’s Model T was increasingly viewed as old fashioned compared with more attractive offerings from its rivals – and songs began to portray them as unstylish and cheap.

Song about Chevrolet and other competitors were not as common.  But here’s one from 1924 that was successful enough to attract the interest of the record labels.

A couple of other famous musicians participated on this recording session as well.  On piano is Phil Ohman, half of the famous Arden-Ohman piano duo and later co-leader of the Arden-Ohman Orchestra which he and Victor Arden headed up.   On banjo is Harry Reser, the most famous banjoist of the 1920s and leader of the house band on the highly successful early network radio program The Clicquot Club Eskimos.   Neither of the musicians are prominently featured on this recording.  But in those days, recording sessions were lucrative work for musicians as participants were usually paid a flat fee per side recorded regardless as to whether the eventually issued record sold well or not.