Posted on May 2, 2021 by dismuke
If you enjoy these recordings help us spread the word that this wonderful, forgotten music exists by sharing this page with your friends. 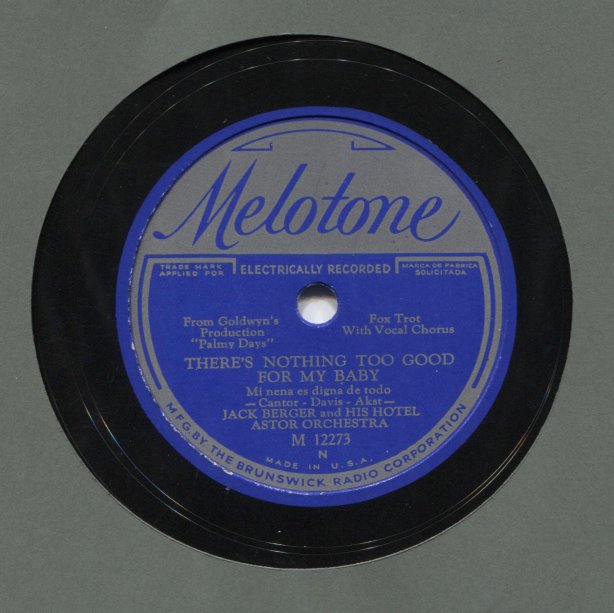 “There’s Nothing Too Good For My Baby”
Jack Berger And His Hotel Astor Orchestra; Peter Cantor, vocal
September 5, 1931 (Melotone M 12273)

Here’s a catchy tune that Eddie Cantor introduced in the 1931 musical comedy Palmy Days which was one of that year’s top grossing films.  The fact that the uncredited vocalist on this recording is named Peter Cantor is mere coincidence and the two were not related.

Jack Berger’s orchestra appeared at New York City’s Hotel Astor for at last six years ending in 1936.  Its broadcasts from the hotel over WEAF were carried by the NBC Red Network and heard nationally.  In addition to Melotone, the band cut records for both the Crown and Bluebird labels.

Very little has been written about Jack Berger or of what became of him after the conclusion of his engagement at Hotel Astor when his name suddenly disappears from newspaper mentions and radio listings.  However, I recently stumbled across this extremely informative article that fills in a lot of blanks about Berger and his career.