Posted on May 14, 2020 by dismuke
If you enjoy these recordings help us spread the word that this wonderful, forgotten music exists by sharing this page with your friends. 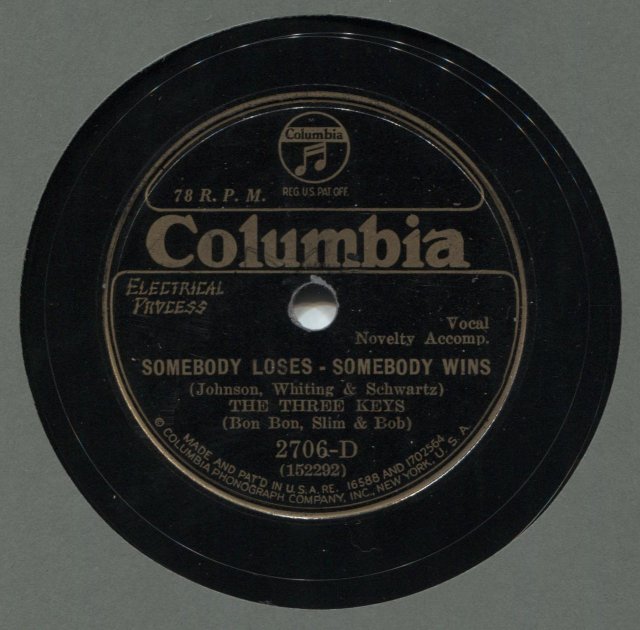 The Three Keys were a vocal harmony group that first performed together in Chester, Pennsylvania in 1931.  It was comprised of John E. “Slim” Furness, Robert “Bob” Pease and George “Bon Bon” Tunnell.

According to promotional material from the time none of the members of the group were able to read music.  After broadcasting locally in Philadelphia they were able to land national exposure over NBC which led to stage appearances on what was still remaining of the old vaudeville circuits and opportunities to cut records for Columbia and Brunswick/Vocalion.

The record here was the group’s first record and their only one that was issued on Columbia.  Less than two weeks later they had their first recording session on Brunswick which led to a handful of sides being made for that label in 1932 and 1933.   Some of their Brunswick sides were reissued on Vocalion in 1934.

Apparently personal difficulties among the group’s members slowed down it’s professional momentum just as its fame was starting to take off.  The Three Keys continued to perform and broadcast through the early 1940s but were never able to recapture their initial success.

Under the leadership of “Slim” Furness the group eventually morphed into The Four Keys and cut records backing up Ella Fitzgerald after she stepped down as the leader of the former Chick Webb Orchestra. Furness brought members of his own family into the group and by the 1950s it was making records as The Furness Brothers.  A number of Furness Brothers recordings can be accessed by searching the group’s name on YouTube.  One that I thought was quite nice was a doo-wop era selection which can be heard at this link.  The Furness Brothers continued performing into the 1980s.

For more information about the group, Marv Goldberg has done a great job researching and documenting its evolution over the decades and what became of its original members in an article that you can access at this link.