Posted on May 6, 2020 by dismuke
If you enjoy these recordings help us spread the word that this wonderful, forgotten music exists by sharing this page with your friends. 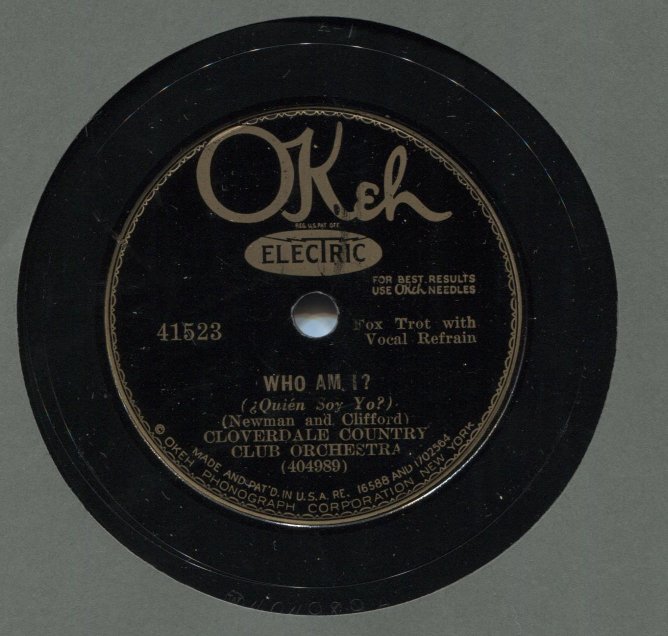 Here are nice renditions of two songs that were popular in 1931.  I thought it would be interesting to share the backstory behind the record they came from.  It is a good example of some of the “smoke and mirror” techniques that the record labels of the era often employed.

The first smokescreen is the name of the group, “Cloverdale Country Club Orchestra.”  In reality, there was no such orchestra. It was merely one of many pseudonyms used for recordings by Ben Selvin’s Orchestra.  During this period, Selvin was an in-house music director for Columbia Records which also owned the Okeh label.

Prior to 1935 the use of pseudonyms was extremely common, especially on a label’s  budget priced subsidiary labels and the so-called “dime store” labels which were specifically manufactured for various retail chains.  For example, the Romeo label was made for the S. H. Kress & Co dime store chain while the Oriole label was made for McCrory Stores.  It was not uncommon for a single recording to be issued on multiple labels under multiple pseudonyms.

Even the full priced flagship labels employed pseudonyms which they often heavily promoted – for example “The High Hatters” on Victor was led by in-house music director Leonard Joy and “The Knickerbockers” and “The Columbians”  on Columbia were pseudonyms for Ben Selvin.  It was more cost effective for a label to issue recordings by its in-house musicians than it was those of top named bands such as Paul Whiteman’s or Fred Waring’s.

The record featured here takes the smoke and mirrors one step further than usual.  When Okeh was acquired by Columbia in 1926 it was allowed to continue operating separately from Columbia.  It had its own roster of artists, its own marketing and its own recording sessions.  The masters from Okeh’s recording sessions had an entirely different numbering system than that which was used on Columbia and its budget labels Harmony, Velvet Tone, Diva and Clarion.

1931, however, was a dismal year for the record industry as the Great Depression made it difficult for people to afford records.  Companies attempted to cut costs any way that they could.

To save money, the company decided to use Ben Selvin recordings originally made for Columbia on some of Okeh’s dance band releases.   But it wasn’t as simple as pressing an extra batch of records from same stampers used for the Harmony/Velvet Tone/Clarion releases and slapping an Okeh label on them as they contained the Columbia matrix number in the run-out area.   To to preserve consistency in the matrix numbering scheme of Okeh releases, a separate Okeh master was made by dubbing a copy from the Columbia master.

Thus the matrix numbers in the song credits above are completely different than those found for the exact same recordings on their Harmony/Velvet Tone and Clarion releases.

Was the public fooled by such smoke and mirror tactics?  They certainly fooled a music critic in the January, 1932 issue of Phonograph Monthly Review who wrote:

“The Okeh annotators do a great deal of shouting about their Cloverdale Country Club Orchestra and the praises it has elicited from the New Yorker. Personally, I think it is far outdistanced by Buddy Campbell’s good humored and spirited orchestra.”

The only problem was that the “Cloverdale Country Club Orchestra” and “Buddy Campbell And His Orchestra” were the exact same orchestra and were just pseudonyms for Ben Selvin’s Orchestra for recordings originally issued on Columbia labels under a different set of pseudonyms and then dubbed over to Okeh masters for release on that label.