Posted on March 21, 2019 by dismuke
If you enjoy these recordings help us spread the word that this wonderful, forgotten music exists by sharing this page with your friends. 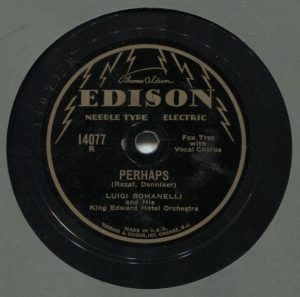 This enjoyable but extremely rare Edison “Needle Type Electric” record, recently donated to Early 1900s Music Preservation for digitization and airplay on Radio Dismuke, was the last record (i.e, the highest catalog number) officially issued by Thomas Edison who had invented the phonograph in 1877.  It was one of a handful of issues that were part of Edison’s last shipment of records on October 22, 1929 for a November 1 release date in stores.   Our last posting featured another donated Needle Type Electric that had a higher catalog number – but that was to have been part of a planned October 29 shipment that never took place due to the closure of Edison’s record and phonograph division after years of declining sales.

Luigi Romanelli was a prominent Canadian bandleader who, at the time of these recordings, regularly appeared at Toronto’s King Edwards Hotel.   Some collectors have speculated that it was unlikely that Romanelli’s band was in New York City where Edison’s recording studios were located on the day of the recording session and that the actual band was the Piccadilly Players, an Edison in-house ensemble led by Mel Morris.   Regardless, this recording of “Perhaps” is delightful – it is filled with the sort of happy, upbeat charm that makes so much of the music from that era special.

Edison’s Needle Type Electric records were part of an an effort, led by Thomas Edison’s son Theodore, to turn around the fortunes of the company’s record and phonograph division and were only issued between July and October 1929.   They were conventional “thin” 78 rpm records – as opposed to the half-inch thick Edison Diamond Discs which had been the company’s main format since 1913 and could only be played on Edison machines or a phonograph equipped with a special conversion device.  Unfortunately, the attempt to market records in a more widely accepted format was too little too late to make up for Edison’s significantly reduced market share and years of financial losses.  Within a couple of weeks after the decision to cease operations, the  stock market crashed and the Great Depression, which had a devastating effect on Edison’s rival record labels, began.  By 1932 record sales had fallen over 90 percent from their high point in the late 1920s.   And, by 1934, all of the 1920s era United States record labels besides Victor had either closed their doors or had been absorbed by The American Record Corporation.