Posted on March 10, 2019 by dismuke
If you enjoy these recordings help us spread the word that this wonderful, forgotten music exists by sharing this page with your friends. 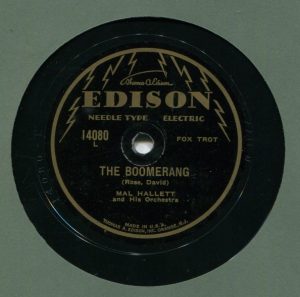 Here is an extremely rare recording that was very generously donated to Early 1900s Music Preservation for digitization and airplay on Radio Dismuke.

All Edison “Needle Type” Electric records are rare – but what makes this issue special is that the company suspended operations before any copies were shipped.   This release was one one of several scheduled to ship on October 29, 1929 in order to be at stores by November 15.   But when Edison executives made the decision in mid-October to close the company’s record and phonograph division, its final shipment of records was on October 22.    The remaining  inventory, including records such as this that were still awaiting release, were made available to employees at a low cost before being sent off to liquidators.

Mal Hallett’s band was based in the Boston area.   “The Boomerang” is a mostly forgotten song composed by Lee David with lyrics by Billy Rose.  The version here is instrumental with a nice jazzy solo about two minutes into the recording.  The Colonial Club Orchestra recorded a vocal version for Brunswick which can regularly be heard on Radio Dismuke.