Posted on November 11, 2018 by dismuke
If you enjoy these recordings help us spread the word that this wonderful, forgotten music exists by sharing this page with your friends. 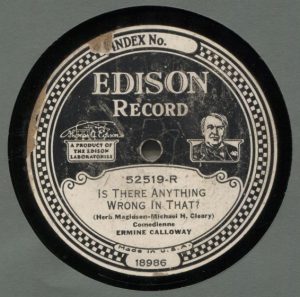 Here is a rare electrically recorded Edison Diamond Disc that was generously donated to Early 1900s Music Preservation for digitization and airplay on Radio Dismuke.

Ermine Calloway (pronounced er-minny) was briefly famous for her “baby vamp” vocals patterned after Helen Kane whose stage persona was later used (against her wishes) as the prototype for the cartoon character Betty Boop. Both sides of this record are fun – and Calloway is backed up on both by a top-notch hot jazz combo.

For most of the late 1920s, Calloway was a Dallas area singer mostly known for her performances of Negro spirituals over local radio stations WRR and WFAA. As a result of the radio exposure she caught the attention of multiple New York based record labels.

Based on Thomas Edison’s prestige as the brilliant inventor who created the recording industry, Calloway’s friends encouraged her to sign up with Edison Records. This turned out to be a very poor advice for Calloway’s budding career. By the late 1920s Edison Records had been losing money for years with sales of its records declining to extremely low levels. The only thing that had kept the label going was Edison’s name and deep pockets.

When Calloway arrived at Edison’s New York studios in January 1929 to make her first recordings, the company was in the middle of a last-ditch effort to save its record business. With great fanfare Edison publicists promoted Calloway as “The Tomboy From Texas” and had her record “boop-oop-a-doop” style vocals as Edison’s answer to Helen Kane’s successful recordings on Victor.

Calloway cut records for Edison into the fall of 1929 with releases on Diamond Discs (which could not be played on a non-Edison phonograph without a special conversion kit) as well as on Edison’s new Needle Type Electric records that could be played on standard phonographs. The Needle Type Electric records were Edison’s attempt to sell records to a wider market. But, once the new records made their debut in July, sales were poor. By late October, a few days before the stock market crashed, Edison executives determined that their record division was no longer viable and suspended operations.

The timing could not have been worse for Calloway. With the onset of the Great Depression, obtaining a new recording contract became extremely difficult. By 1932, between the popularity of radio and the impact of the Depression, sales of phonograph records had fallen by over 90 percent from their late 1920s high. News articles indicate that Calloway continued to perform on radio as late as 1931. But around that time she gave up show business and took a job at a New York City advertising agency where she worked until moving back to Dallas in 1941.

Listening to both sides, it is readily apparent that Calloway was a talented vocalist. And while her records for Edison are fun to listen to, it is a shame that the collapse of Edison Records and the onset of the Great Depression deprived us of the opportunity to hear how she might have sounded on more straightforward vocals minus the hayseed novelty act.