Posted on October 7, 2018 by dismuke
If you enjoy these recordings help us spread the word that this wonderful, forgotten music exists by sharing this page with your friends. 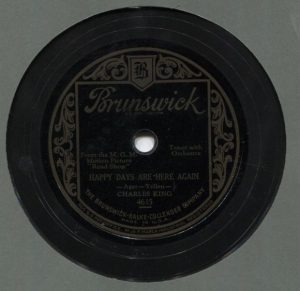 Here is a recording that will soon be added to the Radio Dismuke playlist. It is one of the few songs played on the station that is still well-known to modern audiences thanks in large part to its revival as FDR’s campaign theme song in the 1932 presidential election. It is still performed at political campaign events and in commercial advertising spots. Several versions of the song play on Radio Dismuke – but this one is interesting in that it was recorded by the same artist who performed it in the song’s motion picture debut.

The song dates to 1929 when it was composed by Milton Ager and Jack Yellen for an M.G.M. musical film Road Show. After M.G.M. cancelled work on the film, Ager and Yellen had the song published and it subsequently caught the attention of prominent bandleaders such as Ben Bernie and George Olsen who performed it during their network radio broadcasts. The song’s enthusiastic public reception motivated M.G.M. to revive work on the film which was edited to showcase the song. It was eventually released to theaters in February 1930 under a new title, Chasing Rainbows.

Besides “Happy Days Are Here Again” Chasing Rainbows is best remembered as one of Jack Benny’s early film appearances. Its other star was Charles King, a Broadway and vaudeville veteran who performed the song in the film and who cut this recording for Brunswick in Los Angeles on September 24 1929 (though some sources have put the date at November 29, 1929, which, if true, was one month to the day after the infamous Black Tuesday stock market crash). If you look closely at the label image below you can see that the record was issued prior to the film’s name being changed from Road Show to Chasing Rainbows.

The song also made its way to Germany where it was popularized in late 1930 by the Comedian Harmonists with entirely different lyrics under the title “Wochenend und Sonnenschein”(“Weekend and Sunshine.”)