Posted on January 12, 2020 by dismuke
If you enjoy these recordings help us spread the word that this wonderful, forgotten music exists by sharing this page with your friends. 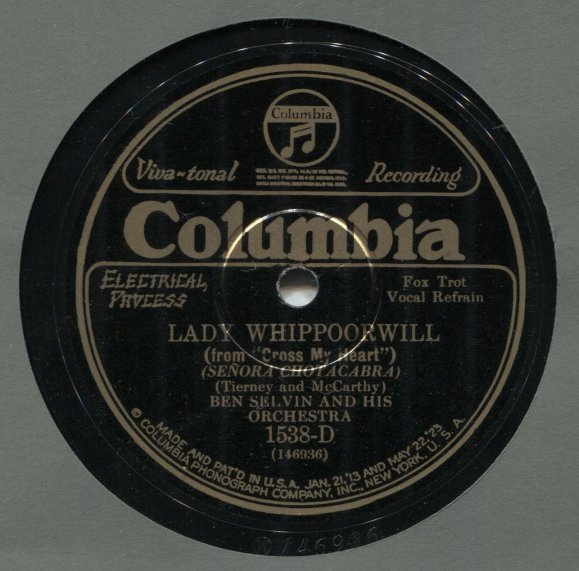 Here is a charming recording of a mostly forgotten song that was recently added to the Radio Dismuke playlist.

“Lady Whippoorwill” was introduced in the musical production Cross My Heart which opened on Broadway at the old Knickerbocker Theatre on September 17, 1928.  The show closed after an eight week run and, two years later, the theater itself was demolished (though the building that replaced it is a rather impressive Ely Jacques Kahn Art Deco skyscraper).

This recording and its flip side, “Right Out Of Heaven,” which was also from Cross My Heart, was made a few weeks prior to the show’s opening.  This was a common practice for record manufacturers as it gave them lead time for records to be in stores in the event that a song appearing in an upcoming production proved to be popular.

In this instance, apparently Columbia was the only record label the song’s publishers were able to convince than an advance recording was worth the risk.  I am not able to find reference of it having been recorded by any other American record label besides one that Columbia itself recorded a day earlier for its budget priced Harmony, Diva and Velvet Tone subsidiary labels.  That recording was made by Rudy Vallee’s Yale Collegians, though Vallee himself did not perform the vocal.  Columbia continued to utilize its outdated acoustical (i.e., pre-microphone) recording equipment for its bargain labels, so, unfortunately, the Vallee recording does not have the nice fidelity that the electrically recorded “Vivia-Tonal” Ben Selvin recording has.