Posted on November 16, 2019 by dismuke
If you enjoy these recordings help us spread the word that this wonderful, forgotten music exists by sharing this page with your friends. 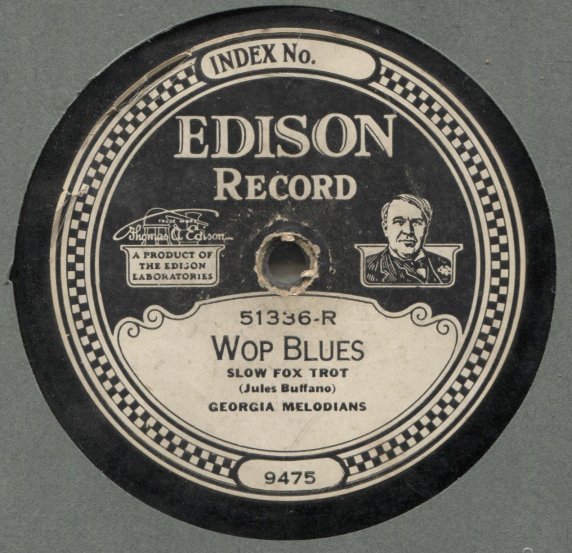 This acoustic Edison Diamond Disc features the first recording made by the Georgia Melodians – the actual band that hailed from Savannah, Georgia which eventually cut an additional fourteen sides for Edison before breaking up by the end of 1924.  The records must have sold well as,  after the band broke up, Edison continued to issue recordings using a different set of musicians under the “Georgia Melodians” name through 1926.

The song’s title “Wop Blues” would be considered “politically incorrect” today as it refers to a pejorative slang term used at the time for people from Southern Italy.  Regardless of any issues with its title, it is an impressive recording and quite jazzy for the Edison label of this period.  Thomas Edison had a well-known dislike for jazz and, despite being deaf in one hear and having 80 percent loss of hearing in the other, personally signed off on every recording issued.  The label’s output of jazzier recordings increased after Edison turned day-to-day operations over to his son Charles in 1926.

“I’m Worried Over You” is typical early 1920s dance band fare.  I think this one is quite charming – yet haunting.