Posted on June 6, 2019 by dismuke
If you enjoy these recordings help us spread the word that this wonderful, forgotten music exists by sharing this page with your friends. 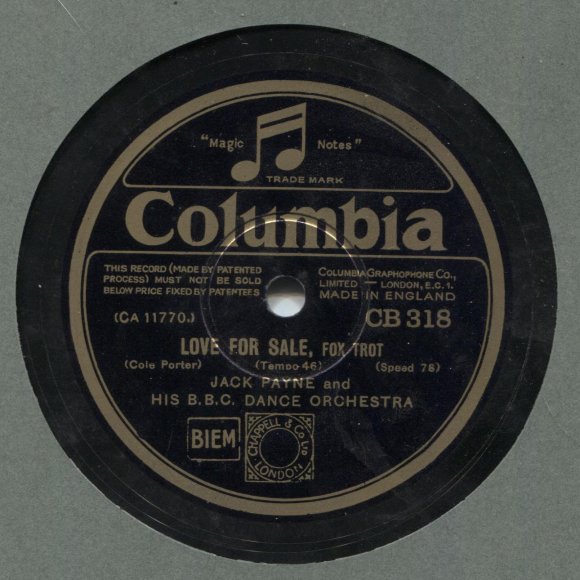 Here is an instrumental recording of a Cole Porter song that, today, is regarded as a “standard” but whose lyrics were regarded as so risque and controversial when it debuted in 1930 that they were banned from radio air play in both the United States and Great Britain.

“Love For Sale” debuted in the Broadway musical production The New Yorkers and describes prostitution from the perspective of a prostitute.  The critical response was so harsh that the show’s producers replaced the original performer, Kathryn Crawford, with Elisabeth Welch on the premise that white audiences and critics would be less offended if the role of the prostitute was performed by a black actress.

At this link you can read Elisabeth Welch’s account of how she came into the part and watch an amazing video of her performing the song’s full lyrics 50 years later at the age of 76.

In Great Britain the lyrics were banned from play on the BBC.  I am not sure if there was a formal ban of them being performed on records.  But there might as well have been as the closest thing to a vocal version by a British band I could find was Al Bowlly performing with the Roy Fox band in which Bowlly quietly scatted “la-la la” sounds instead of words.  The other British recordings of the song besides the Jack Payne version featured here included the Eddie Grossbart,  Howard Goodfrey, Nat Star and Jack Hylton bands- and all of them are listed as instrumentals.

In response to the controversy surrounding the song’s lyrics, Cole Porter was quoted as saying: “I can’t understand it. You can write a novel about a harlot, paint a picture of a harlot, but you can’t write a song about a harlot.”