Posted on March 3, 2019 by dismuke
If you enjoy these recordings help us spread the word that this wonderful, forgotten music exists by sharing this page with your friends. 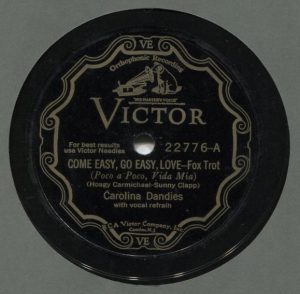 The credit on the label might say “Carolina Dandies” but the band was a Texas-based ensemble with a somewhat odd name – Sunny Clapp And His Band O’ Sunshine. The band only made a handful of recordings, but all of them are excellent.

Clapp (his real name was Charles Clapp) co-composed with Hoagy Carmichael one of the songs featured on this record, “Come Easy, Go Easy, Love.” Carmichael himself performs the vocal but, as was common in that period, was not credited on the label.

The Clapp band had recorded previous takes of the song, none of which were ever issued. The first attempt was in July 1929 with band member Bob Hutchingson doing the vocal. The band recorded an additional two takes in an April 16, 1931 recording session with the vocal performed by the elusive Jeanne Geddies. It is too bad that neither of the Geddies takes were issued. Little seems to be known about Geddies besides the fact that she only made two recordings, both during that same recording session and both very memorable: “Treat Me Like A Baby” and “Learn To Croon” (both regularly played on Radio Dismuke). It would have been nice for history, as well as fans such as myself, to have another recording by her. One can perhaps hope that a master or a test pressing of one of those unissued takes has managed to survive in a vault somewhere and will perhaps someday be made public.

The unaccredited vocal on the “When I Can’t Be With You” side is by George Marks who was also the band’s pianist. Prior to joining the band, Marks had worked for the infamous Blue Steele, a bandleader, usually based out of Dallas, who was notorious for physically assaulting band members who resigned to work elsewhere. No word on what happened when Marks left for the Sunny Clapp band. But in the 1940s Steele spent time in prison after a victim of one of his attacks died as a result of his injuries.

Some years ago I had the privilege of spending an afternoon with a musician who, in the 1920s and 1930s, performed with various bands in the Dallas/Fort Worth and Chicago areas. He told me that, during the Depression, the Sunny Clapp band became stranded in Fort Worth after the musicians’ union learned that it had accepted a gig at less than union rate. Every member of the band was fined $100 (about $1,900 in today’s currency) and forbidden from performing for an entire month – they were essentially left with no money and no way of earning any for several weeks. Given that the Depression was likely what enticed them to perform at the lower rate in the first place, that was indeed a stiff punishment.