Posted on April 1, 2018 by dismuke
If you enjoy these recordings help us spread the word that this wonderful, forgotten music exists by sharing this page with your friends. 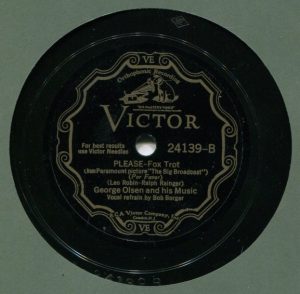 1932 High Fidelity – Here’s a really nice record that is part of a collection generously donated to Early 1900s Music Preservation for digitization and airplay on Radio Dismuke The Great Depression hit the record business especially hard – so much so that by 1932 annual sales of Victor Records had fallen by a devastating 92 percent from their 1928 peak. Nevertheless, Victor engineers continued to press forward experimenting with new microphones and disc cutters. By 1932 Victor began issuing recordings with remarkably improved fidelity, including the two sides here recorded in New York on September 24, 1932.

The improved fidelity is most apparent on the “A” side featuring an upbeat version of “It’s Gonna Be You” with Fran Frey on the vocal.

This version of “Please” will be joining several others currently in the Radio Dismuke playlist. The song was introduced by Bing Crosby in the 1932 film “The Big Broadcast” and was recorded by a number of American and British artists that same year.

Unfortunately, the new higher fidelity records became a casualty of the Depression. The improved fidelity came at the price of the records wearing out more quickly on most phonographs still in use at the time. Since few people could afford records to begin with, let alone an upgraded phonograph, a decision was made around 1934 to cut back on the fidelity. During the same period Victor had also issued its first commercial long-playing records that played at 33 rpm for about 12 minutes per side on a ten inch record. Here, too, because of the need for an upgraded phonograph, they were not commercially successful and were soon discontinued. It wouldn’t be until 1948 that long-playing records would once again become available to the general public.